What is to find truth

So, imagine that you had your smartphone miniaturized

and hooked up directly to your brain.

If you had this sort of brain chip,

you'd be able to upload and download to the internet

at the speed of thought.

Accessing social media or Wikipedia would be a lot like --

well, from the inside at least --

It would be as easy and as intimate as thinking.

But would it make it easier for you to know what's true?

Just because a way of accessing information is faster

it doesn't mean it's more reliable, of course,

and it doesn't mean that we would all interpret it the same way.

And it doesn't mean that you would be any better at evaluating it.

because, you know, more data, less time for evaluation.

Something like this is already happening to us right now.

We already carry a world of information around in our pockets,

between what's real and what's fake.

It's as if we know more but understand less.

Now, it's a feature of modern life, I suppose,

that large swaths of the public live in isolated information bubbles.

We're polarized: not just over values, but over the facts.

One reason for that is, the data analytics that drive the internet

get us not just more information,

but more of the information that we want.

Our online life is personalized;

everything from the ads we read

to the news that comes down our Facebook feed

is tailored to satisfy our preferences.

And so while we get more information,

a lot of that information ends up reflecting ourselves

as much as it does reality.

It ends up, I suppose,

inflating our bubbles rather than bursting them.

And so maybe it's no surprise

that we're in a situation, a paradoxical situation,

of thinking that we know so much more,

and yet not agreeing on what it is we know.

So how are we going to solve this problem of knowledge polarization?

One obvious tactic is to try to fix our technology,

to redesign our digital platforms,

so as to make them less susceptible to polarization.

And I'm happy to report

that many smart people at Google and Facebook are working on just that.

And these projects are vital.

I think that fixing technology is obviously really important,

but I don't think technology alone, fixing it, is going to solve the problem

it is a technological problem.

I think it's a human problem,

having to do with how we think and what we value.

In order to solve it, I think we're going to need help.

We're going to need help from psychology and political science.

But we're also going to need help, I think, from philosophy.

Because to solve the problem of knowledge polarization,

we're going to need to reconnect

with one fundamental, philosophical idea:

that we live in a common reality.

The idea of a common reality is like, I suppose,

a lot of philosophical concepts:

but mysteriously difficult to put into practice.

To really accept it,

I think we need to do three things,

each of which is a challenge right now.

First, we need to believe in truth.

that our culture is having something of a troubled relationship

with that concept right now.

It seems as if we disagree so much that,

as one political commentator put it not long ago,

it's as if there are no facts anymore.

But that thought is actually an expression

of a sort of seductive line of argument that's in the air.

we just can't step outside of our own perspectives;

we can't step outside of our biases.

Every time we try,

we just get more information from our perspective.

So, this line of thought goes,

we might as well admit that objective truth is an illusion,

or it doesn't matter,

because either we'll never know what it is,

or it doesn't exist in the first place.

That's not a new philosophical thought --

During the end of the last century, as some of you know,

it was very popular in certain academic circles.

But it really goes back all the way to the Greek philosopher Protagoras,

if not farther back.

Protagoras said that objective truth was an illusion

because "man is the measure of all things."

Man is the measure of all things.

That can seem like a bracing bit of realpolitik to people,

because it allows each of us to discover or make our own truth.

But actually, I think it's a bit of self-serving rationalization

It confuses the difficulty of being certain

with the impossibility of truth.

of course it's difficult to be certain about anything;

You might have a brain chip in your head

feeding you all the wrong information.

But in practice, we do agree on all sorts of facts.

We agree that bullets can kill people.

We agree that you can't flap your arms and fly.

that there is an external reality

and ignoring it can get you hurt.

Nonetheless, skepticism about truth can be tempting,

because it allows us to rationalize away our own biases.

When we do that, we're sort of like the guy in the movie

who knew he was living in "The Matrix"

but decided he liked it there, anyway.

After all, getting what you want feels good.

Being right all the time feels good.

So, often it's easier for us

to wrap ourselves in our cozy information bubbles,

and take those bubbles as the measure of reality.

An example, I think, of how this bad faith gets into our action

is our reaction to the phenomenon of fake news.

The fake news that spread on the internet

during the American presidential election of 2016

was designed to feed into our biases,

designed to inflate our bubbles.

But what was really striking about it

was not just that it fooled so many people.

What was really striking to me about fake news,

is how quickly it itself became the subject of knowledge polarization;

That's an example of the bad faith towards the truth that I'm talking about.

But the really, I think, dangerous thing

about skepticism with regard to truth

is that it leads to despotism.

"Man is the measure of all things"

inevitably becomes "The Man is the measure of all things."

Just as "every man for himself"

always seems to turn out to be "only the strong survive."

the thought policeman O'Brien is torturing the protagonist Winston Smith

What O'Brien says is the point,

is that he wants to convince Smith that whatever the party says is the truth,

and the truth is whatever the party says.

And what O'Brien knows is that once this thought is accepted,

You can't speak truth to power

if the power speaks truth by definition.

I said that in order to accept that we really live in a common reality,

we have to do three things.

The first thing is to believe in truth.

The second thing can be summed up

by the Latin phrase that Kant took as the motto for the Enlightenment:

Or as Kant wants, "to dare to know for yourself."

I think in the early days of the internet,

a lot of us thought

that information technology was always going to make it easier

for us to know for ourselves,

and of course in many ways, it has.

But as the internet has become more and more a part of our lives,

our reliance on it, our use of it,

Much of what we know today we Google-know.

and sort of shuffle them along the assembly line of social media.

precisely because it involves a sort of intellectual outsourcing.

We offload our effort onto a network of others and algorithms.

And that allows us, of course, to not clutter our minds

with all sorts of facts.

We can just download them when we need them.

But there's a difference between downloading a set of facts

and really understanding how or why those facts are as they are.

Understanding why a particular disease spreads,

or how a mathematical proof works,

or why your friend is depressed,

It's going to require, most likely,

doing some work for yourself:

having a little creative insight;

getting out into the field;

working through the proof;

Now, I'm not saying, of course, that we should stop Google-knowing.

we shouldn't overvalue it, either.

We need to find ways of encouraging forms of knowing that are more active,

and don't always involve passing off our effort into our bubble.

And bubble-knowing means always being right.

But daring to know,

means risking the possibility that you could be wrong.

It means risking the possibility

that what you want and what's true are different things.

if we want to accept that we live in a common reality.

That third thing is: have a little humility.

which means, in a sense,

knowing that you don't know it all.

But it also means something more than that.

It means seeing your worldview as open to improvement

by the evidence and experience of others.

Seeing your worldview as open to improvement

by the evidence and experience of others.

That's more than just being open to change.

It's more than just being open to self-improvement.

It means seeing your knowledge as capable of enhancing

or being enriched by what others contribute.

That's part of what is involved

in recognizing there's a common reality

that you, too, are responsible to.

I don't think it's much of a stretch to say

that our society is not particularly great at enhancing or encouraging

that sort of humility.

well, we tend to confuse arrogance and confidence.

And it's partly because, well, you know,

It's just easier to think of yourself as knowing it all.

It's just easier to think of yourself as having it all figured out.

But that's another example of the bad faith towards the truth

that I've been talking about.

So the concept of a common reality,

can seem so obvious,

that we can look right past it

and forget why it's important.

at least some of the time,

to inhabit a common space,

a space where they can pass ideas back and forth

when -- and especially when --

But you can't strive to inhabit that space

if you don't already accept that you live in the same reality.

To accept that, we've got to believe in truth,

we've got to encourage more active ways of knowing.

And we've got to have the humility

to realize that we're not the measure of all things.

We may yet one day realize the vision

of having the internet in our brains.

But if we want that to be liberating and not terrifying,

if we want it to expand our understanding

and not just our passive knowing,

we need to remember that our perspectives,

as wondrous, as beautiful as they are,

perspectives on one reality. 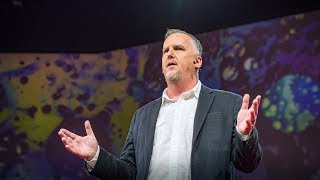 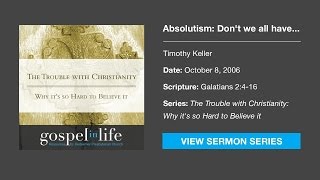 Absolutism: Don't we all have to find truth for ourselves? – Timothy Keller [Sermon] 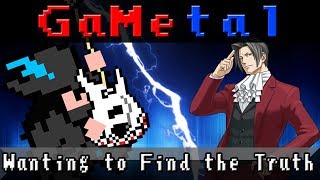 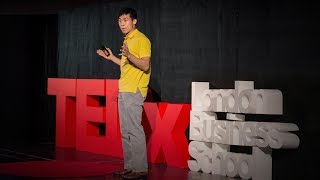 What to trust in a "post-truth" world | Alex Edmans 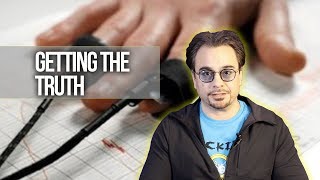 12 Steps To Get The TRUTH From Anyone | Human Lie Detector 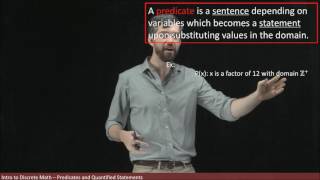 Predicates and their Truth Sets 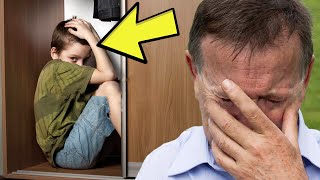 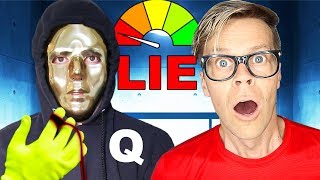 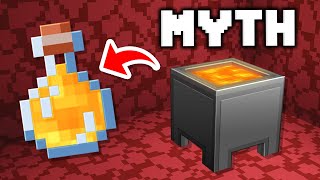 I Tested 10 Minecraft Myths to Find the TRUTH! 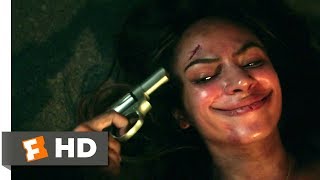